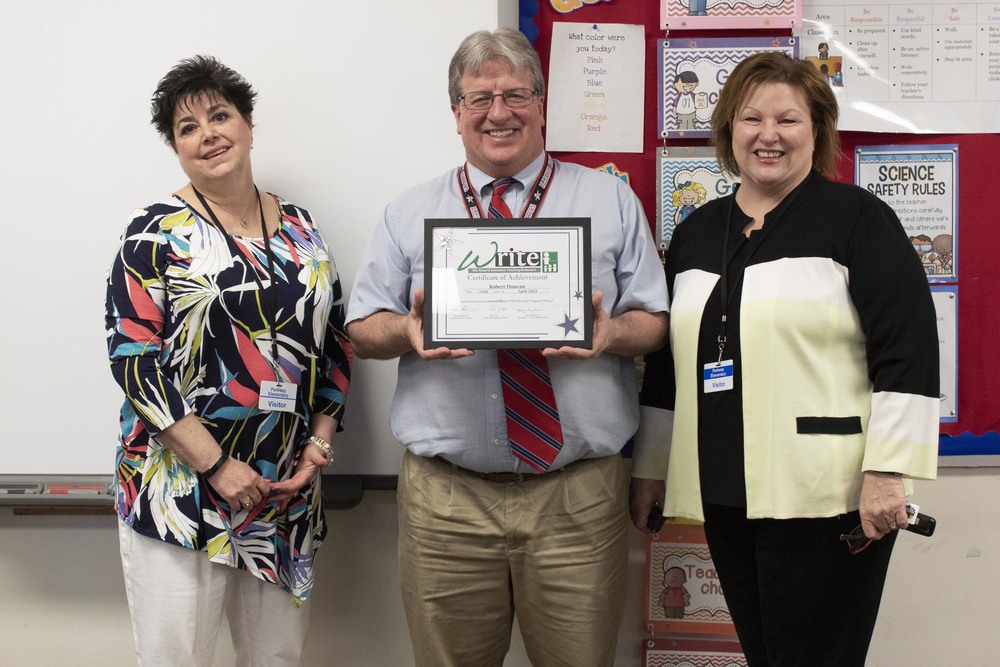 The grant worth $500 was awarded to Duncan by members of the company and the grant committee members who visited his classroom to present him with all the materials he had requested in his grant proposal. Duncan had requested different style locks and lock boxes to complete the escape room kits which will be used during his third grade lessons for science, math and social studies.

“I first became interested in implementing escape room challenges in my third grade classroom this past summer,” Duncan stated in his proposal. “I had the opportunity to take an online course on creating and utilizing this highly motivating technique.”

The idea for the escape rooms provides a creative way for the students to think critically in the classroom during various lessons. For example, the students will only be able to unlock the box during a science lesson if they identify specific elements on the periodic table and use the corresponding atomic numbers as the lock code. The students will learn valuable information in a fun way that doesn’t have to feel like a traditional classroom lesson.

Nancy Sarson, director of the educational division at FriendsOffice, presented the award to Duncan along with Brittany Pecora, of the marketing department, and Sandy Zollos, the Parkway account representative. They spoke on how impressed they were with the creativity of the lockboxes and encouraged Duncan to apply again in the following years for another chance to win more supplies.

While the grant was only worth $500, the locks and boxes needed cost well over the designated amount of the grant. The MasterLock Company funded the remaining amount to ensure Duncan had all the supplies he needed for his classroom.

“Unlike instructional materials that are used once in isolation during the school year,” Duncan wrote in the proposal. “These materials can be adapted and changed to use throughout the entire year.”

Duncan said he looks forward to learning how the locks work and coming up with new and exciting escape room ideas for his students to experience.