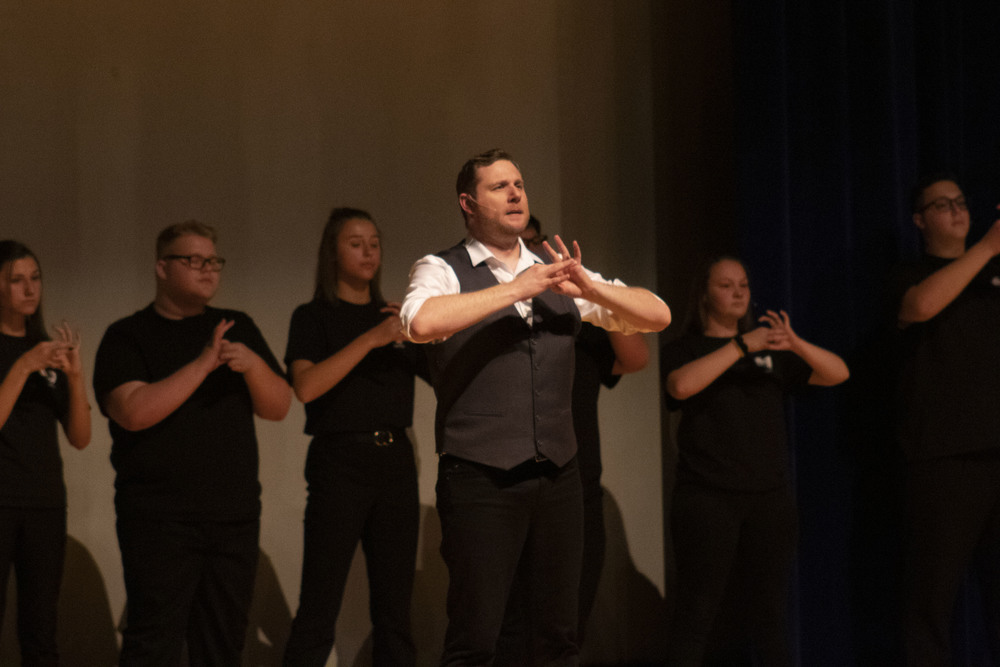 On Wednesday night, William Martinez took to the stage at Alliance High School with his performance of “Signing the Song: You Have Changed My Life.” Written and performed by Martinez himself, the story details his life growing up in a deaf family as a hearing child.

Martinez is the son of a deaf mother and a hearing father. When he was young, his parents separated and he lived with his mother. His first language was American Sign Language (ASL). Growing up, he attended numerous schools. He lived a lonely life, a silent life most of the time. All he wanted was to be noticed, to be heard and to belong. That was until middle school when he met the teacher that would change his life. Norma Freeman was his choir teacher, and she is the one that told him he was a singer and encouraged him to follow his newfound passion.

Martinez invited his mother to his first choir concert where he surprised her by singing and signing. Freeman was the one who gave him the idea and helped him to combine both the deaf and hearing worlds together for his performance. His mother was thrilled and they began singing and signing songs together.

Eventually, Martinez moved in with his father across town. His father knew how important Freeman and his son’s friends were to him, so instead of moving him from another school, he let Martinez stay and commuted everyday.

Growing up, Martinez was not the best at academics. He struggled in every class, except for choir. It was his father who helped him.

“You know that phrase ‘he taught me everything that I know?’” Martinez asked the audience. “That is one hundred percent true of my father.”

Martinez graduated and went on to college where he majored in musical theater. It was there he realized how much his life was changed by Freeman. He credits her for saving him from the darkness, for changing the path he was on and for saving his life. He didn’t get the chance to thank her until 25 years later.

“It wasn’t until college that I realized the only reason I was where I was at was because of one person, my eighth grade choir teacher, Miss Norma Freeman,” Martinez said. “And I never told her thank you. I never told her who she was to me. I never even said goodbye. I have always regretted that.”

Martinez worked as a performer on a cruise ship for a time following college singing covers. He also did a solo performance which led to the creation of “Signing the Song.” He told his life story and how Freeman impacted his life through music, performance and signing. He was approached by Harry and Rosemary Wong, educational speakers and educators. They asked him to perform his story for educators and he agreed not realizing the story his impact would have on the educational community. It was at one of his performances he was finally able to thank Freeman by performing a song he had written just for her.

Martinez is now a motivational speaker. He travels the country performing “Signing the song” for educators and students. His performance at Alliance High School included choir students from Alliance Intermediate School, the eighth grade choir and the AHS choirs taking part in the encore performance and a featured section for the choralaires.

“What I loved most about this experience was really the partnership with Mrs. Chunat,” Martinez said. “I think it’s so exciting to see a teacher who is passionate around trying new things and exposing her students to different cultures, different languages and also trusting that the community would get something out of my unique story.”

The inspirational performance is one that the audience will remember. Celebrating inclusivity for the deaf culture has been happening for some time at Alliance City Schools. The ASL classes at AHS are popular and filled with students passionate about the culture and learning the language in order to communicate well.

“This was such a powerful experience for our students, I am grateful to work in a district as open-minded, inclusive and supportive as Alliance City Schools,” said Carrie Chunat, choir director at AHS. “The students really enjoyed reaching past the barriers of disability and opening their eyes, minds and hearts to something new and different through ASL. It was an incredibly moving experience to be a part of, and I appreciate all the support to make the evening a success.”

Before Martinez took the stage, choir students had the opportunity to perform in an open mic night style event in the lobby followed by a single song performance from each of the choirs in attendance.

“The kids were exceptional, they worked very hard and were very professional and very prepared when I showed up. I think what was the most exceptional thing for me is having over 200 kids all working together to inspire an entire audience, communicating simultaneously in two languages as well as singing, as well as swaying,” Martinez said. “How passionate they were, and you could feel the pride in the room from the parents and the community, but also from them. I think that for me, it will be a moment that I cherish for the rest of my life and I hope that it’ll be the same for them.”