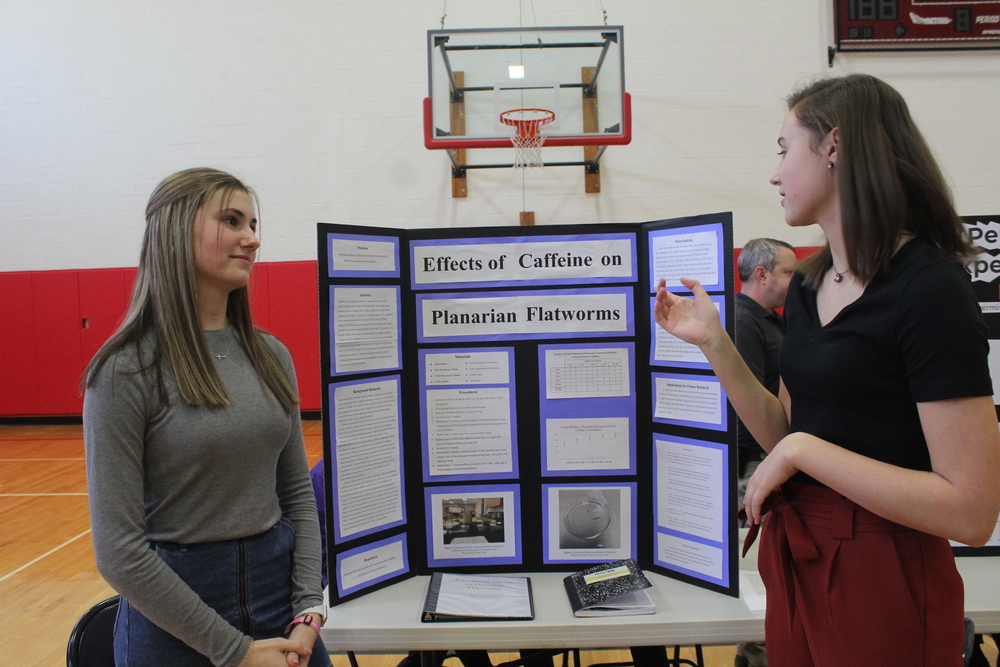 Six projects received superior ratings at Science Alliance, the high school’s annual science fair. The ten students who created these projects are eligible to attend the District Science Fair at the University of Mount Union on Mar. 14.

Sophomore Caroline Denny received the Best of Show and Microbiology awards in addition to a superior rating for her project testing the effects of calcium chloride on the efficiency of E. coli, a bacterium.

Sophomores Jane Cook and Jane Miller received a superior rating and the Medicine and Health Award for their project “Effects of Caffeine on Planarian Flatworms.” The two placed flatworms in solutions containing varying amounts of caffeine and tracked their movements, finding that the worms moved more frequently in mixtures containing higher concentrations of caffeine.

Sophomore Ryin Motry was awarded a superior rating and the Behavioral Science Award for her project titled “Complicated Problems and Reaction Times.”

Sophomore Emma Huff received the Math Award and a superior rating for her project “Forrest Gump Chaos Theory.” This theory assumes that in a specific grouping of chocolates, it’s impossible to predict the frequency of different types or colors of chocolate. The theory originated with Forrest Gump himself, who said life was “like a box of chocolates. You never know what you’re gonna get.”

Sophomores Shannon Bowman, Samantha Gotter and Alyssa Risley were also awarded superior ratings for their project that tested the effectiveness of various types of soaps when washing hands.

The final students to receive a superior rating were seniors Sebastian Fisk and Abby Oyster, who compared the efficiency of different types of mouthwashes in their project titled “Wash Your Mouth.” They performed their study at Aultman Alliance Community Hospital, where the two said they “had a lot of fun working at.”

Nancy Holub, the director of Science Alliance, was proud of the students who participated. While she noted that there were fewer projects this year than in past science fairs, she said the projects present were still “very high-quality.”

Those students moving on to the District Science Fair have the chance to go to the State Science Day at Ohio State University on May 9, depending on the rating they receive at Districts.