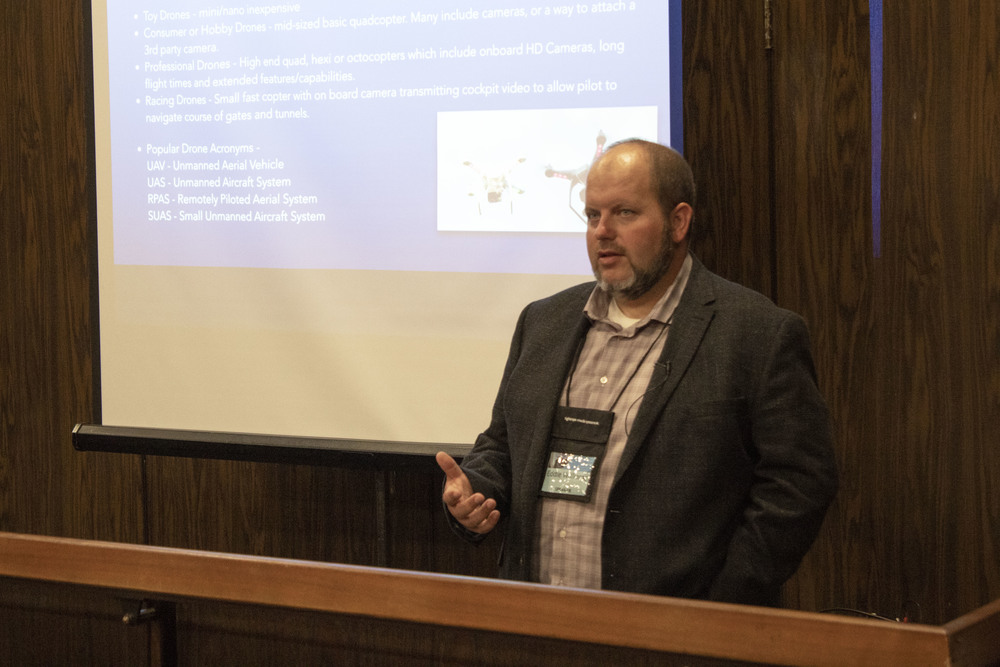 For the first time, Alliance High School hosted the Central States Media conference and Trade Show. The conference was held Oct. 26-28. Each year the conference is hosted in a different location in either Ohio, Indiana, Kentucky or Michigan.

Many of the staff and students involved with Spectrum Channel 1022 spent the weekend working as runners and room hosts to help the conference flow smoothly.

The conference began on Friday with registration, the first round of sessions and a reception at the Glamorgan Castle. It was a weekend packed full of events for the participants including multiple sessions relating to the media industry taught by people from Alliance and former students of the high school’s Media Arts program.

One of the sessions available on Saturday morning was a Drone Demo provided by Eddie Williams, a drone hobbyist. Williams spoke about the basics of a drone including the terminology, classifications and laws and regulations required to fly a drone.

Williams first started flying drones after his neighbor, William Kinser, showed him how to use a small drone. Kinser, a Media Arts student, flew a small drone in the gym to provide a demonstration to the conference participants.

During his presentation, Williams showed footage he had filmed using his drones to demonstrate the popular camera angles filmmakers use and the different ways drones can be used to take photos and videos for media related use.

A keynote address was held on Saturday for the conference. It featured David Phillippi, a former student of the Media Arts program, who has made a career working in the media industry. During the keynote luncheon, the Roxie Cole Leadership Award was presented to John Hampu, a longtime host for Spectrum Channel 1022.

Saturday evening consisted of the Philo Festival of Media Arts hosted at Jupiter Studios. Each year, shows and videos can be submitted for judging in three divisions- professional, non professional and student- for 26 different categories.

The winners receive their awards during the Philo Film Festival, where short clips are shown to the audience. This year, the AHS Media Arts program received two awards, both in the student division. The Empowerment/Inspiration award was awarded to Rainah Torrez, a Media Arts student, for her video “Racial Discrimination in Schools.” Molly Schafer, the assistant director for Channel 1022, accepted the award on behalf of Torrez.

“I’d just like to thank everybody for allowing us to get this award,” Sinkovich said. “I’d like to thank the staff and students at Channel 1022 in Alliance. The style show is one of the most fun events that we do.”

The Philo Festival was hosted by Scott Robertson, a Marlington graduate who attended the AHS Media Arts program. Scott credits much of his success to the program. It allowed him to break out of his shell and learn to communicate in front of people.

“If anybody knows Scott, it’s hard to believe he had a shell,” said Kyle Schwarz, director of Channel 1022.

Kyle was the person who advocated for the conference to be held in Alliance. She wanted to show off the Media Arts program and show the unique aspects of Spectrum Channel 1022.

“I was extremely pleased with our first experience hosting the 4 state conference,” Schwarz said. “It was so great to see so many AHS Media Arts alums -Mike Simon, David Philliipi, Scott Robertson, and Brock Schwarz- participating as workshop leaders and speakers. The custodial staff was on top of everything and the attendees were very impressed with our high school facility, the Castle and local caterers. It was quite a learning experience for the staff and students who participated.”

The current Media Arts students were encouraged to take part in the workshop sessions and to take advantage of the networking opportunities provided to them over the weekend.