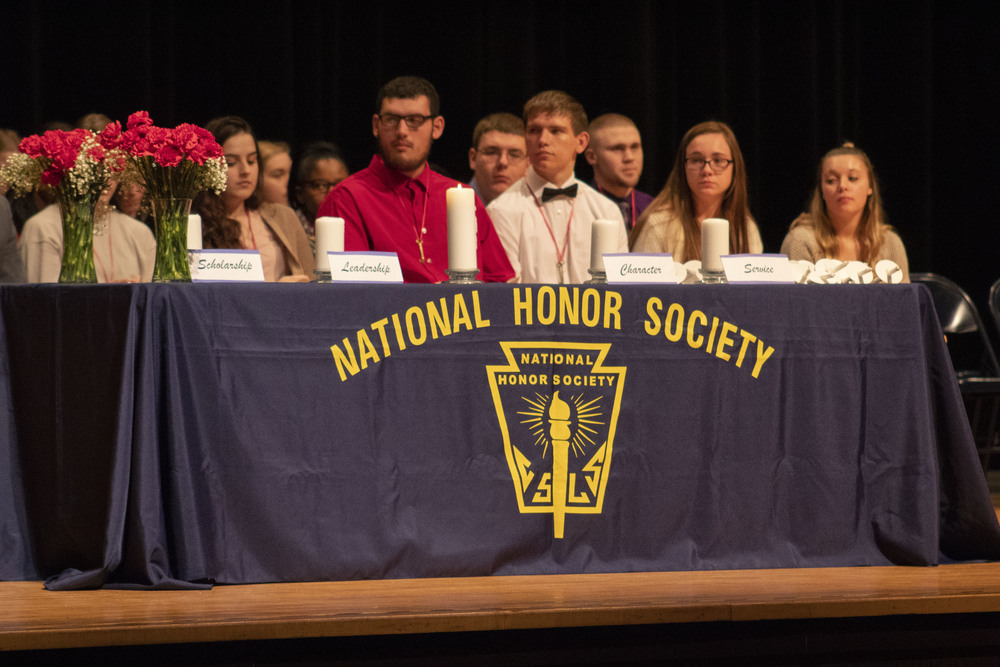 Allison Waggoner, president of NHS, welcomed the parents and students in attendance as the ceremony began.

“We are gathered here to formally recognize those students who have been selected by the faculty of our school for successfully completing their candidacy and are being inducted as new members of our NHS chapter,” Waggoner said.

Seth Stevens led the attendees in the Pledge of Allegiance leading to the opening remarks by Superintendent Jeffery Talbert.

“As superintendent of Alliance City Schools, it is my honor to have the opportunity to lead off tonight’s program,” Talbert said. “For nearly one hundred years, National Honor Society has recognized student excellence in the areas of scholarship, leadership, service and character.”

As per the ceremony, two NHS members, Stefan Thalacker and Rachael Wagner, called the inductees up one at a time to be “keyed”  by current members. Each new member was presented with a carnation and a key placed around their neck welcoming them into the ranks of NHS.

Following the keying part of the ceremony, each of the NHS officers explained one of the four pillars of NHS: James Gray, Jr. spoke on Scholarship, Alivia Williamson spoke on Leadership, Waggoner spoke on Character and Brandon Mazzei spoke on Service. Each officer lit the candle coinciding with their pillar.

The inductees, each with a small candle of their own, lit their candle with the one representing the pillar that resonates with them the most. The NHS pledge was recited following the candles and Principal Shawn Jackson spoke the closing remarks.

“Yesterday I spent some time, and I really did this, I went through all of their schedules yesterday,” Jackson said. “And I gotta tell you, I was really impressed with what I saw. What these students up here do is they take the best classes that we have to offer. Now one thing that we really pride ourselves here at Alliance High School is that we have a really wide range of curriculum for these students to take, and these students, they really take advantage of it.”

Jackson expressed how he was not only a proud principal at the ceremony, but a proud parent as well with his son, Gus, being inducted into NHS during the ceremony.

The ceremony concluded with the singing of the alma mater by the members of NHS, administration and families in attendance.

Congratulations to the new members!