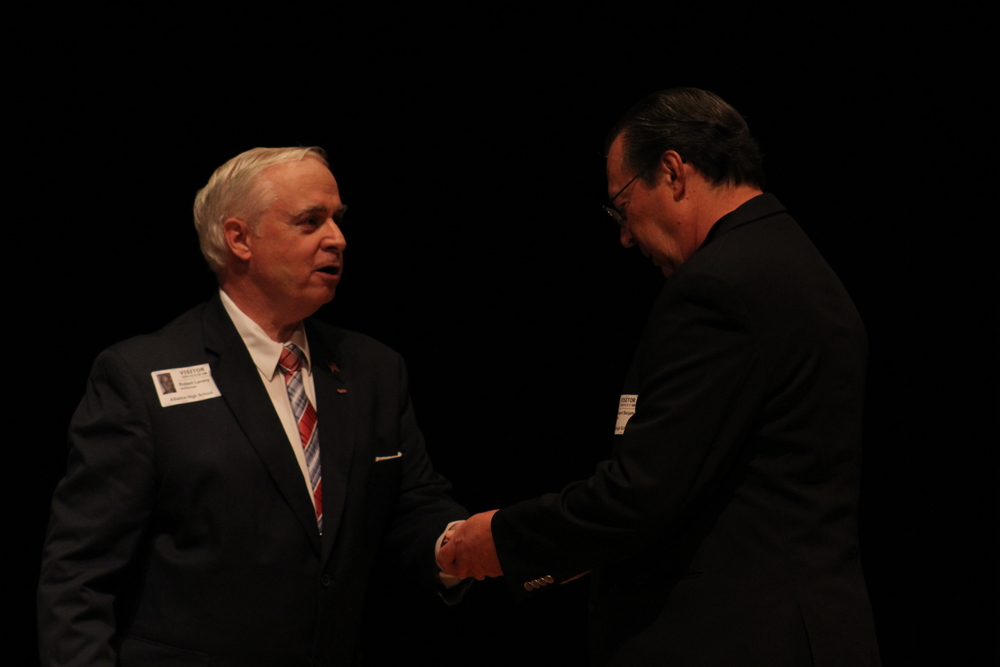 The Distinguished Alumni Assembly was held at Alliance High School on Oct. 1, bringing Alliance graduates and their loved ones from across the country back to their alma mater to talk about their success.

The ceremony brought to 100 the number of inductees since the Distinguished Alumni Committee was created in 1966.

With a short introduction from Robert Lavery, chair of the Distinguished Alumni Committee responsible for choosing the inductees, the first of the alumni was brought to the stage.

“There’s not a thing that hasn’t been touched by an artist,” said 1969 graduate Robert Benjamin.

Benjamin pursued a career in art following his graduation from high school, discovering his passion for landscape paintings and becoming enamored of the New Mexican countryside.

Many of Benjamin’s works are displayed in public and private collections across the country, such as the Smithsonian Institution’s Collection of Fine Arts in Washington D.C.

Benjamin’s speech was in line with his life’s work, focusing primarily on a series of his paintings that he displayed to the audience, saying he usually lets his paintings speak for him.

Following Benjamin was Dr. John Blebea, a 1974 graduate who specializes in vascular surgery and has received more than 40 research grants in his lifetime.

Arriving in America at the age of 9 from Romania with little to no knowledge of English, and now a professor of surgery at the University of Oklahoma, Blebea had a lot to say about success.

Blebea detailed a four-step plan for success to the audience, emphasizing the importance of “defining your interests and skills, avoiding addiction, doing the right thing, and maintaining your faith.”

The third inductee was Dr. Wilton “Bill” Eckley, a 1947 graduate of Alliance High School who taught subjects ranging from French to military history on both the high school and college level until his retirement from the Colorado School of Mines in 1999.

Eckley unfortunately passed away in August of 2017, leaving his son, Doug Eckley, to speak on his behalf. Rather than discuss his father’s achievements, Eckley instead focused on stories of his father that he remembered from his childhood.

One story involved his father marching backward into a goal post in front of his entire school, while another included countless questions he asked his father about his time working as a cleaner in the circus, in which the topic of elephant excrement came up frequently.

Still, Eckley worked some words of wisdom into his stories, saying “if you make a mistake, be like my dad, get over it.”

The last to be inducted was Ernest S. Prince, a civil rights activist who was a member of the Urban League in Westchester, New York, an equal rights organization, for over 30 years until he passed away in 2011. Speaking for him was his wife, Cheryl Prince.

“Service, responsibility, dignity. These are just a few of the words that describe Ernest Prince.” In her speech, Prince highlighted the effect her husband had on those around him, advocating for the underserved and making his family feel loved.

Prince talked about her husband’s dedication to his work, claiming that “it was never a job, it was a responsibility.” Ending her speech with a request for the audience to follow in Ernest Prince’s footsteps, she told them to live their lives “with dignity.”

Alliance High School principal Shawn Jackson closed off the assembly with a thanks to the inductees and those who came to speak on their behalf. Calling them “shining examples of what our students should strive to be,” Jackson reiterated their success to an audience full of students with opportunity ahead of them.